Dressing chambers were facilities found throughout the city of New Orleans, as well as the Louisiana Bayou, where one could change their clothing without having to leave the area.

The Assassin Aveline de Grandpré made significant use of these facilities, and had the options of changing into an Assassin, Lady or Slave outfit. Most of these buildings were initially in disrepair, and had to be renovated before they could be accessed. 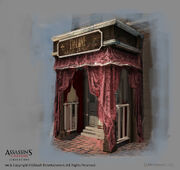 Concept art of a dressing chamber

Aveline in front of an unrenovated dressing chamber

A dressing chamber in San Danje

Retrieved from "https://assassinscreed.fandom.com/wiki/Dressing_chambers?oldid=788709"
Community content is available under CC-BY-SA unless otherwise noted.