Assassin's Creed Wiki
Register
Don't have an account?
Sign In
Advertisement
in: Articles that need updating, Articles in need of sources, Animals, Guards

The dog (Canis lupus familiaris) is a domesticated subspecies of wolves. They have been bred by humans across the world for a variety of roles, such as pets, guards, or hunting companions.

The Greeks immortalized dogs in their mythology by giving Hades, the lord of the underworld, his own hound: the three-headed Cerberos.[1] Their bond was considered close enough for Hades to be portrayed with Cerberos ever by his side.[1][2]

In ancient Greece, dogs were typical companions among everyday people. In many cities and villages, they could be found roaming as pets or strays.[1]

In the 6th century BCE, the philosopher Pythagoras once asked a man in Croton to stop beating a dog, claiming he could hear the voice of an old friend in its cries. This amazed the crowd watching him, as it appeared to prove his belief in reincarnation. Later, he cast out his disciple Alcmaeon for torturing a dog.[3]

Despite their status among humans, their body parts were also traded in Greek markets. In the early years of the Peloponnesian War, dog claws were valued at 2 drachmae apiece and their skulls at 7 drachmae apiece.[1]

In Egypt, dogs were a common sight in and around of human settlements.[2] They also served as guards and protectors, like Anta in 48 BCE.[4]

In the Ming dynasty, the imperial military trained dogs to assist guards in detecting intruders in restricted areas like the prisons in Maijishan Grottoes or the Forbidden City. Assassins like Shao Jun used their agile training to circumvent them because tools such as noise darts and firecrackers would only serve to incite their attention.[5]

Soldiers in the Thirteen Colonies used dogs to guard treasure chests, as well as to sniff out enemies. As the Assassin Ratonhnhaké:ton experienced in a vision of an alternate future cast by an Apple of Eden, their keen sense of smell could have allowed them to pierce through even his Wolf Cloak ability of invisibility.[6]

The aristocratic de la Serre family kept an Irish wolfhound named Scratch in their estate in Paris. Both Julie and her daughter Élise were very fond of the pet.[7]

Following his retirement, Edward Kenway took an Irish wolfhound as a pet, which he named Thatch, after his late friend Edward Thatch.[8]

Apart from their usual role as guardians, dogs were also trained to fight in contests against other dogs in London during the Victorian era.[9] [citation needed] The prime minister Benjamin Disraeli and his wife Mary Anne had a pet dog named Desmond, whom they often carried around in a handbag. The Assassin Jacob Frye had to retrieve him after some thugs stole Mary Anne's handbag in Devil's Acre.[10]

In 2020, while reliving Eivor's genetic memories through the Portable Animus HR-8.5, the Assassin Layla Hassan modified the Animus interface to allow for a variety of skins to be applied to her horse:

Dogs feature widely across the Assassin's Creed series and are non-player characters in many of its video games. In some installments, they act as enemy units that have a special range of detection against the player. They can alert other enemies to the player's presence by barking.

However, in Assassin's Creed III, soldiers in New York City ignore their dogs' barking if the player behaves in an inconspicuous manner while their Notoriety is incognito. Dogs can be killed and skinned like other animals in the game, but they yield similar items as when skinning a wolf.

In the spin-off game Assassin's Creed Chronicles: China, dogs are a particular gameplay mechanic. They only appear in cages and function as stationary alarm systems with a constant radius of detection. If the player character Shao Jun enters this zone, the dog will immediately begin barking and raise the alert of all enemies in the area. Unlike other enemy units, this detection zone cannot be altered by the application of tools—noise darts, firecrackers, and throwing knives only provoke them and cause instant detection. As a result, the player only has the option of navigating around them. This mechanic reappears in the sequel, Assassin's Creed Chronicles: India, except the caged dogs are replaced by caged Bengal tigers.

Connor standing by a guard dog 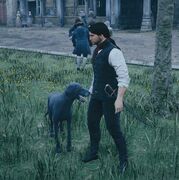 Arno and a dog in Paris

Dogs howling at the moon in Cyrene

A dog in Greece