The mode was released as a downloadable add-on on 20 February 2018 and is available for free to those who own the base game, or for purchase as a stand-alone version on PC. In it, players are to free roam the game's map of ancient Egypt and learn about the kingdom's history through a series of guided tours.[1]

The Major Regions of Egypt

Bringer of Life, The Nile River

The City of Memphis

The Founding of Cyrene

The Temple of Zeus in Cyrene

The Acropolis of Cyrene

The Origin of the Pyramid

The Step Pyramid Complex of Djoser

The Bent Pyramid of Dahshur

The Red Pyramid of Dahshur

Pyramids of the Middle Kingdom

An Overview of The Giza Necropolis

The Riddles of the Sphinx

The Secrets of the Great Pyramid

The Siege of Alexandria

Alexandria: Planning of the City

Learn about the design and layout of the city of Alexandria.

The Great Library of Alexandria

The Mouseion of Alexandria

The Islands of Pharos

The Hippodrome of Alexandria

The Importance of Mummies

Evolution of Pottery in Ancient Egypt

The Forts of Cyrenaica

Timeline
Add a photo to this gallery

Discovery Tour Ancient Egypt
Add a photo to this gallery 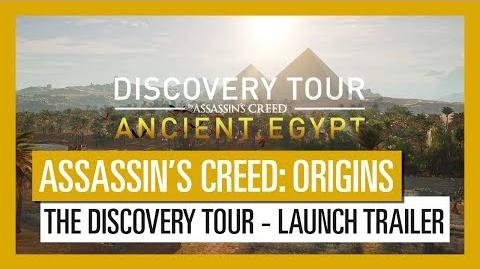 Retrieved from "https://assassinscreed.fandom.com/wiki/Discovery_Tour:_Ancient_Egypt?oldid=857706"
Community content is available under CC-BY-SA unless otherwise noted.