Diocles was a Greek magistrate who lived in Cyrene, Cyrenaica during the 1st century BCE. A childhood friend of the healer Praxilla, he befriended the Medjay Bayek of Siwa, during Bayek's hunt of Flavius Metellus, a leader of the Order of the Ancients.

After being assisted by Bayek to deal with the corrupt magistrate Leander, Diocles befriended the Roman architect Vitruvius, and together with Praxilla, they dubbed themselves as Cyrene's Triumvirate.

In 47 BCE, the Medjay Bayek of Siwa met with Diocles in Cyrene, having been directed to him by Praxilla, a childhood friend of the latter. Diocles informed Bayek that the target he was looking for, Flavius Metellus, ruled the city from the Roman Akropolis, wishing him luck in his quest. Diocles later informed Bayek to seek him out to deal with Leander, a corrupt magistrate in the city.[1]

After Flavius's assassination, Bayek sought out Diocles just like he had asked, meeting him in the Agora of the city. Diocles explained to Bayek the details regarding Leander, who had allied himself with Flavius, providing him absolute power in the city. Anyone who turned against Leander were either bribed or threatened, leading Diocles to plan a form of action. Diocles requested Bayek to locate his fellow magistrate Simonides, who had attended an event at Leander's villa in search of evidence of the magistrate's corruption, but had yet to return. Suspecting that Simonides was most likely at a brothel or a tavern in the city, Diocles directed Bayek to search for him and bring him to his home near the Cyrene Gladiator Arena.[2]

Bayek found a drunken Simonides outside the tavern and brought him back to Diocles' home. Diocles proved to be correct as Simonides had been unable to recover the document detailing Leander's corruption. Bayek stepped in and offered to help them recover the evidence, allowing Diocles to petition the other magistrates against Leander, in hopes of forcing him to stand down. While Bayek was at the villa, Diocles recruited the magistrates and gathered in the Apollonion of Cyrene, where they planned to use the evidence against Leander. Unbeknownst to Diocles, Leander had planned to have them assassinated and had gathered his men in an attempt to ambush the magistrates. However, Bayek arrived just in time to defend Diocles and the magistrates, defeating Leander and his men, and thus eliminating Flavius' influence in Cyrenaica.[2]

After the overthrow of Flavius and Leander, Diocles met with Bayek, the architect Vitruvius, and Praxilla at the Oracle of Apollo. Together, the three Cyrenaicans formed Cyrene's Triumvirate. Diocles also proposed to Praxilla, and they begun to plan their future together.[3]

The name "Diocles" in Modern Greek (Διοκλῆς Dioklēs) means 'Glory of Zeus' and was used by several individuals in Greek mythology and ancient history. 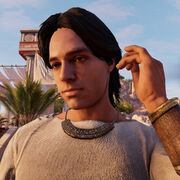 Diocles with Bayek, Vitruvius and Praxilla