The Deathbed of Ariadne was a ruined shrine in Maenad's Hills on Naxos Island, Greece.

According to legends, the site was where Ariadne, the Kretan princess and later a goddess of the labyrinth, maze, and snakes, was abandoned by her lover, the legendary hero Theseus, who is also considered the founder of Athens. Ariadne was subsequently killed by the huntress goddess, Artemis, for defiling a sacred place dedicated to her.[1]

During the Peloponnesian War, the site was visited by the Spartan misthios Kassandra, who discovered in the ruins a group of Followers of Ares, as well as the apparent remains of Ariadne. Kassandra subsequently claimed the Followers' valuables.[2]

The deathbed of Ariadne 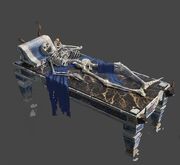 Retrieved from "https://assassinscreed.fandom.com/wiki/Deathbed_of_Ariadne?oldid=836650"
Community content is available under CC-BY-SA unless otherwise noted.