The Deacon (harvested from: Cyril of Rhodes) was an Animi Avatar in the second stage of the Animi Training Program, used by Abstergo Industries to train their recruits. His specialty weapon was a kilij, which is a type of Turkish long sword.

The Deacon had several unique moves:

Casually walking up to his target, the Deacon pulls out his sword and strikes them in the forehead with its hilt. He then takes advantage of their defenselessness by piercing his victim's stomach with his kilij and withdrawing it quickly, watching them crumple to the floor, dead.

Stealthily approaching his target from behind, the Deacon draws his kilij, before slashing his sword horizontally across the target's spine, causing them to go weak at the knees. He then follows through with his attack by wedging his blade into the right of his victim's abdomen, and proceeds to free his kilij by forcing his victim forwards with his foot, the sword slashing through their side along the way.

Forgoing stealth, the Deacon runs up to his target and swiftly slashes his target across the stomach with his sword, causing them to keel over in pain. From there, he lifts his kilij high and then brutally stabs his sword in between the shoulder blades of his victim while they are leaning over, piercing their heart and killing them instantaneously.

Rushing towards his target from behind, the Deacon thrusts his kilij into their back, before slowly and painfully forcing the blade through his victim until it fully penetrates them, the hilt adjacent to their body. As they stare down at the blade, the Deacon roughly pulls it free, with his target collapsing dead to the ground shortly afterwards.

Grabbing his seated target's foot, the Deacon drags them off the bench until their head rests against it. Before his victim can do anything to defend themselves, he forcefully kicks them in the face, violently sending their head backwards and breaking his target's neck on the bench behind them.

Leaping from above, the Deacon unsheathes his sword, before he makes contact with his target. Crashing into them, he impales his victim's heart through a crevice in their neck, before standing up and leaving them to die on the floor.

The Deacon could be customized in several ways:

Concept art of the Deacon 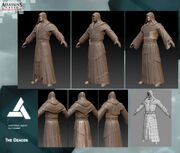 Early texture models of the Deacon 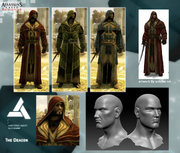 Models of the Deacon, showing his customization options

The Deacon's customization options, viewed from the front

The Deacon's customization options, viewed from the back

The Deacon killing a Bombardier, while another Bombardier kills his own target in the background

The Deacon being slowed down by the Thespian's throwing knives, while the Vanguard kills her own target