David Walston, commonly known as Big Dave, was a blacksmith who resided within the Davenport Homestead during the American Revolution. While there, David assisted with crafting weapons and other objects, which could later be sold to raise income, or for Ratonhnhaké:ton's personal use.

During his travels, the Kanien'kehá:ka Assassin Ratonhnhaké:ton discovered David in the Frontier, where he was being held at gunpoint by British troops for deserting his fellow soldiers.[1]

Approaching the group, Ratonhnhaké:ton killed the troops surrounding David before relieving him of his bonds. Ratonhnhaké:ton offered David hospitality and work as the blacksmith at the Davenport Homestead where he would be safe, to which David agreed.[1]

Life on the Homestead

Soon after David arrived at the Homestead, Norris requested his assistance in constructing a new hunting knife for Myriam. David agreed, but the tools he possessed were not hard enough to work the metal Norris had mined, so he requested that Connor pick up the required parts from a general store in New York.[2]

Soon after, David was one of the residents who, along with Ratonhnhaké:ton, came to Ellen's aid when her abusive husband Quincent was attempting to break into her home. The group succeeded in besting Quincent's gang and driving them off the Homestead.[3]

Sometime later, David discovered that a British scout had been sneaking around the Mile's End, and subsequently apprehended him with Oliver's assistance. While being interrogated, the soldier claimed to be alone and in search of a deserter by the name of "Big Dave." However, Connor spotted the soldier's companion and killed him, inadvertently allowing the first scout to escape.[4]

As Ratonhnhaké:ton had surmised, David had been discovered on the Homestead by a group of British soldiers who intended to have him sentenced for his desertion. To this end, Ratonhnhaké:ton, David, Godfrey, Terry, and Myriam battled with the troops that came to arrest him. Once the final soldier was killed, Ratonhnhaké:ton assured David that he was free, as the British would not waste any additional soldiers to recapture one man.[5]

Later, David smelted wedding bands for Norris and Myriam, and attended their wedding and reception.[6] In 1781, he attended the funeral of Achilles Davenport and laid a rose on his coffin.[7]

In an alternate timeline where George Washington crowned himself king of the United States with an Apple of Eden, Big Dave worked in Boston as a blacksmith loyal to Benjamin Franklin.[8]

On the advice of Franklin, Ratonhnhaké:ton visited Dave to acquire a special type of metal needed to bypass security at Washington's New York residence. Dave, however had already forged the metal into horseshoes for a client for need of pay. He pointed Ratonhnhaké:ton in the direction of his horse.[8] 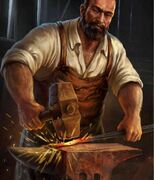 David thanking Ratonhnhaké:ton for his assistance