The Daughters of Artemis, also called the Huntresses of Artemis[1], were a tribal society of female warriors who worshipped Artemis, the Greek goddess of the hunt and Moon.

The Daughters of Artemis saw themselves as protectors of the land's flora and fauna and made use of animals like bears and wolves to protect it. They were also skillful archers.[2]

"The Daughters of Artemis are strong here. I'll be on my guard."
―Kassandra in Malis[src]

The Daughters of Artemis favored hunting camps set deep in the woods or near places sacred to Artemis. Occasionally, these camps became larger settlements, most notable among them being their original home of Huntress Village on the island of Chios, and the village of Lamia in Malis.[2]

The emblem of the Daughters of Artemis was a stylized figure of a woman drawing a bow, presumably a depiction of Artemis. They wore furs and animal skins, and had often painted red markings on their skin.[2]

To the Daughters of Artemis, the Hind of Keryneia was a sacred creature.[3]

The Daughters seemed to favor staying out of the Peloponnesian War and stuck to their settlements and the wilderness. However, they were known for harassing the common folk, usually by releasing the latter's animals, but also by threatening those who hunted in 'their' forests. They also sometimes disturbed religious practices or downright destroyed statues and shrines.[4]

Following this duel, with Kassandra as the victor, the Daughters pledged themselves to her, and some of them joined the crew of her ship, the Adrestia.[6]

A Pathfinder, wolf out of shot

A Beastmaster with a black bear

Kassandra infiltrating a camp of the Daughters of Artemis

A crew consisting of the Daughters aboard the Adrestia 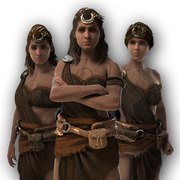 An icon of the crew skin

A Daughter of Artemis praying