A massive strongman with a missing eye, which earned him the nickname "one-eyed dragon", Masamune was feared throughout much of northern Japan for his cunning and ruthlessness. As daimyo, Masamune began attacking nearby clans to expand his own, eventually ruling over most of Tōhoku.

The Imperial Regent at the time, Toyotomi Hideyoshi, saw the wisdom in having Masamune as an ally, as did Hideyoshi's successor, Tokugawa Ieyasu. Eventually, Masamune became lord of the profitable Sendai Domain, making him one of the most powerful men in Japan. He was later responsible for starting the first Japanese voyage around the world. 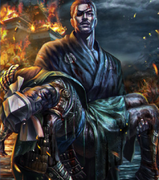 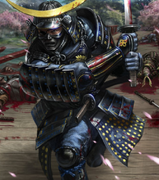 Date Masamune in his armor

Masamune being interrogated by Yamauchi Taka