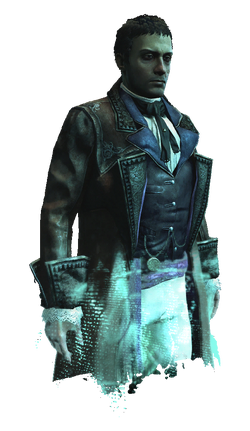 Woodes Rogers was born into money, to a seafaring family with deep roots in both Pocke and Bristol, England. His early life was a picture of industriousness and ambition, and by the age of 18 he was an apprentice Mariner.

Upon his father's death at sea in 1706, Woodes inherited his family's prosperous shipping company, which he took to managing with great passion. Between 1704 and 1707 Rogers' fortunes and family grew, and by the time he was twenty-seven his marriage to Sarah Whetstone had produced one son and two daughters.

By the end of 1707, however, his business had suffered great losses by raiding French forces, giving Rogers the idea to recoup these dreadful losses himself. Knocking about Bristol in search of a partner for this endeavor, he soon found himself in the company of William Dampier, and old friend and unlucky Captain who suggested setting out on a privateering expedition, one that would range far and wide about the New World. In 1708, Rogers made the necessary arrangements and set out as Captain of his own vessel, on a difficult voyage that would last over three years.

Along this course Rogers met with many successes and failures. In 1709, off the western coast of South America, he found and rescued a marooned sailor by the name of Alexander Selkirk, a sailor who had spent nearly 4 years living in isolation and who would serve as the inspiration for the book "Robinson Crusoe" just a few years later.

Soon after Selkirk's recovery, Rogers' fleet engaged an enemy vessel in open combat – a skirmish that earned him a pistol shot to the left side of his face and a mangled heel. Neither wound was enough to remove him from command however, and he continued serving as captain until his return to England in late 1711. To commemorate this return, he had an operation to remove the offending bullet from his upper palate.

(This guy is incredible! Can we make an entire film about him? -OG)

Now in poor health but high spirits, set about writing his memoirs. Upon their publication a few years, they were an immediate success, and proved a great source of income. But this brief glory was offset by the sudden death of his son, a tragedy compounded some months later by his wife's decision to leave him. Also at this time, Rogers was sued by former shipmates for allegedly hoarding goods and money plundered from enemy vessels. Rogers assembled a defense, but lost the case.

In 1713, itching to return to sea, he organized passage to Madagascar claiming to be a merchant in the slave trade, but with the intended purpose of reconnoitering the rumored pirate colonies established there. When he arrived in Madagascar after months of hard sailing, he found that the legends of the pirate town "Libertalia" had been exaggerated one-hundredfold. The pirates in Madagascar were sickly and few and desperate for help. After spending just a few months here, Rogers set sail for England, a failure in his own mind...

And yet, never one to give up hope, Woodes Rogers reoriented his attentions to the West Indies... eventually lobbying King George for a commission to hunt pirates in the Caribbean. On this score, he succeeded. After a few dilligent years of making his case, King George appointed Woodes Rogers as the Governor of the Bahamas. Now, at last, he would make his mark, and bring justice to a land where chaos had taken root...

Rogers arrived in Nassau at the head of a small fleet of half a dozen ships on the 22nd of July, 1718. Accompanied by Commodore Peter Chamberlaine, he spent the first day negotiating with the pirates living there, hoping to entice each and every man on the island with the King's Pardon. Rogers' hopes were quickly dashed by Charles Vane and his men, who blasted their way out of Nassau's harbor with the aid of a fireship.

This minor set-back hardly mattered, for Nassau was now in the hands of the British, just as Rogers had promised his king, and a number of former pirates – Benjamin Hornigold among them – now sailed for him. Rogers set about renovating the city at once, first ridding it of its remaining rogues and rapscalions, and even going so far as to hang a number of men who refused the king's pardon, yet remained on the island.

But Roger's swift initial success suffered an early complication when a huge portion of his crew took ill and died, likely of Yellow Fever. Another large portion of the soldiers who had accompanied him to Nassau departed with little warning for the colonies up north. And perhaps most troubling of all, Spain and England were at war again making Nassau a likely target for Spanish aggression.

He wasn't wrong. In March of 1719, he got word that a Spanish fleet was on its way to attack his fragile town. Rogers had spent much of his own private fortune renovating the decrepit fort town, but he was still unprepared for a full Spanish assault. Much to his relief, the Spanish fleet turned away at the last minute and instead attacked a French settlement to the north.

Rogers served as Governor for three full years in Nassau, and though he did not suffer any more military threats after early 1719, his job was no less difficult. Dwindling finances and a general apathy among the population led to only modest improvement to the city. In early 1721 however, he caught wind that the King was unhappy with his performance in the fledgling community. Rogers decided to return to England to defend himself, but fell deathly ill before he could make the trip, and still later was wounded in a duel gone bad. Recuperating in Charles-Towne, South Carolina, for some six weeks, he finally left for England in March of 1721.

Arriving in England, he found his worst fears come true: he had been sacked, and a new governor had been appointed to run the Bahamas. Worse yet, he was imprisoned for defaulting on the debts he had accrued during his time as Governor – the same debts caused by the King's refusal to fund his term as Governor. Rogers was eventually released from jail, and spent the next few years recovering from this slight as best as he could, until the publication of Charles Johnson's "General History of the Robberies and Murders of the Most Notorious Pyrates", which painted Rogers in a heroic fight for his single-minded quest to rid the seas of pirates.

Propelled into the limelight once more, Rogers was given an excellent pension by the King, and awarded a second shot at his old job. Rogers returned to Nassau in 1728, a Governor once more... a post which he kept to the end of his life just 3 years later.

Retrieved from "https://assassinscreed.fandom.com/wiki/Database:_Woodes_Rogers?oldid=718588"
Community content is available under CC-BY-SA unless otherwise noted.