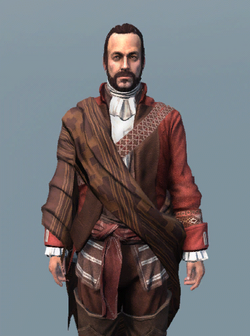 William Johnson was a land speculator, and Britain's principal treaty negotiator with the Indigenous peoples in the northern part of the colonies - particularly the Iroquois.

Johnson was born in Ireland , but moved to the colonies in 1738 to look after his Uncle's property on the Mohawk River. However, it wasn't long before Johnson branched out into business for himself, acquiring property on the opposite side of the river and setting up a sawmill and trading post, which he named "Mount Johnson". Which to me always sounds like mating instructions from a caveman. In 1743 he moved to an even larger parcel of land which he named "Fort Johnson". (He may have been an excellent businessman, but it's possible he lacked an imagination.)

Johnson befriended the Indigenous peoples in the area, particularly the Kanien'kehá:ka - whose language he learned. His respect for their customs helped him rise to prominence as liaison between the Iroquois peoples and the British government. Johnson was named Superintendent of Indian Affairs in 1756. As a contact who knows the land and it's people, he's probably the best you'll find.

In addition to treaty negotiations, Johnson was in charge of recruiting and leading Iroquois fighters during the French and Indian War. He only fought in one battle, but he was rewarded handsomely for his service - £5000 and a Baronetcy. That was a little above average for most people involved in that battle.

He continued his close ties with the Kanien'kehá:ka and in 1760 they gave him land totaling more than 300 square kilometres as a thanks for his work.

However, Johnson burned some bridges in 1768 when he negotiated the Treaty of Fort Stanwix. He took much more land than the British had asked for - a windfall for him, since he could then speculate on it - but rather a tough sell to the Indigenous nations who lived on the land. The treaty caused a war in Virginia (known as Dunmore's War). In an effort to stop more bloodshed (and possibly to cover his own arse), Johnson called for more negotiations - this time at Johnson Hall, in 1774.

In case you're wondering, the official reason for Johnson's death was given out as a stroke. I guess publiscising that he was killed while threatening to murder treaty negotiators would probably have caused some political tensions, to put it mildly. I suppose a blow to the head, for example, could be described as a very heavy stroke.

Retrieved from "https://assassinscreed.fandom.com/wiki/Database:_William_Johnson_(Assassin%27s_Creed_III)?oldid=804022"
Community content is available under CC-BY-SA unless otherwise noted.