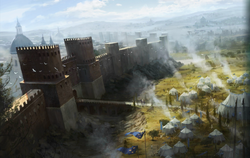 The War of the League of Cambrai was a major conflict in the Italian Wars. The war was fought from 1508 to 1516 and the participants were France, the Papal States and the Republic of Venice. Several different Western European powers joined the war at various times such as Spain, the Holy Roman Empire, Scotland, England, Firenze, the Duchies of Ferrara, Milan and several Swiss mercenaries.

Intending to curb the Venetian influence in northern Italy, Pope Julius II created the League of Cambrai, that served as an anti-Venetian alliance that included Louis XII of France, the Roman Emperor Maximillian I and Ferdinand II of Aragon. The League was initially a success, but the friction between Julius and Louis caused it to collapse by 1510.

Though in 1512 the Holy League managed to drive the French from Italy, later the French regained territory in 1515 which then ended the war the following year.

Retrieved from "https://assassinscreed.fandom.com/wiki/Database:_War_of_the_League_of_Cambrai?oldid=851194"
Community content is available under CC-BY-SA unless otherwise noted.