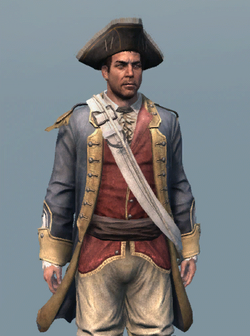 Thomas Hickey was an Irish born member of the British Army. He arrived in Boston in 1752, but it wasn't long before he was assigned to William Johnson's personal guard, apparently at Johnson's request (possibly because their families were connected in Ireland, or maybe he found the name 'Hickey' funny, the record isn't clear.)

Hickey served under Johnson during the French and Indian war, but then he left the army after being written up several times for disorderly conduct. After 1760 Hickey disappears from the historical record for several years. I do, however, have several mentions in William Johnson's household accounts of payments made to "T.H.". It's possible Hickey was working for him as a spy. If so, he should really have developed some tougher codes to crack.

Hickey resurfaces during the rebel occupation of New York in 1776. He became a member of George Washington's personal bodyguard - commonly known among the soldiers as the "Life Guard". I'd imagine it took some pretty clever political maneuvering to get him there, given his record. I've seen some suggestions that he was a well-respected member of the Connecticut Militia, but I can't find a service record for him there (and I have my doubts Hickey could ever have been described as 'well-respected').

In any case, Hickey immediately betrayed his commission by planning to assassinate Washington. Maybe T.H. stood for That Hooligan.

History tells us that Thomas Hickey was hanged for sedition in front of 20,000 troops - as an example. That's an interesting interpretation of events, but since New York didn't have stadium seating at the time, I doubt many of the soldiers had a great view of the execution. The important message for them was "Don't be a traitor, you'll get hanged", not the niceties of who was on the gibbet.

Retrieved from "https://assassinscreed.fandom.com/wiki/Database:_Thomas_Hickey?oldid=804042"
Community content is available under CC-BY-SA unless otherwise noted.