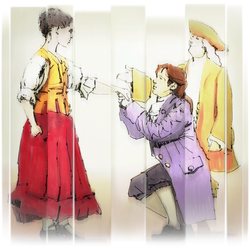 Written by the playwright Pierre-Augustin Caron de Beaumarchais, the Marriage of Figaro played for the first time on April 27, 1784 at the all new Théatre de l'Odéon in Paris. It followed on from the Barber of Seville. The play was popularly received as an indictment of the aristocracy: each of its five acts criticizes the privileges and hierarchies inherent to the Ancien Régime. In the play, the main character, the valet Figaro, must foil the plans of his master, the Count Almaviva, who intends to take advantage of his bride-to-be, Susanna. The defining moment of the play is Figaro's long monologue in the fifth act, when he directly challenges the Count: "What have you done to deserve such advantages? Put yourself to the to the trouble of being born, nothing more." At the time, such words were scandalous and, within his broad comedy, Beaumarchais had pithily summed up the logic of the coming Revolution. In 1786, Mozart composed music for an opera based on the play.

Retrieved from "https://assassinscreed.fandom.com/wiki/Database:_The_Marriage_of_Figaro?oldid=719137"
Community content is available under CC-BY-SA unless otherwise noted.