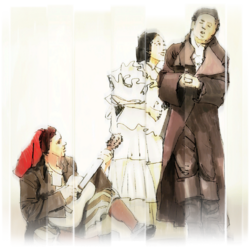 The first of the plays from the Figaro trilogy by Pierre-Augustin Caron de Beaumarchais, the Barber of Seville (1775) tells the story of a gentleman from Seville, the Count Almaviva, who sets out to win the heart of Rosine, ward to the aging and unscrupulous Bartolo. This he achieves thanks to the ruse of his clever valet, Figaro. Almaviva, under the name Lindoro, disguises himself as a poor student to gain entry and upset Bartolo's plans. Rossini used the play as a libretto for his opera of the same name in 1816.

Retrieved from "https://assassinscreed.fandom.com/wiki/Database:_The_Barber_of_Seville?oldid=719138"
Community content is available under CC-BY-SA unless otherwise noted.