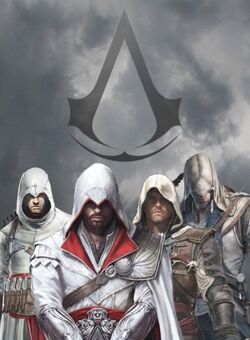 The Assassin Brotherhood is a secret organization whose ideology is centered on the belief that only free will can ensure the betterment of humanity. We have existed throughout recorded human history, locked in a battle with the Templar Order, who believe, well, pretty much the opposite of what we do. It's why we fight.

(Here's a question for you, if both sides existed before the historical Hashashin and Order of the Knights Templar, what were they called? –RC)

Excellent question! Shush your lips up. There have been Brotherhoods recorded throughout the time: the Roman Empire, the Middle Ages, the Italian Wars, the American Revolution, the French Revolution, the Haitian Revolution. We're big on revolutions.

But the one we're focused on today is the Industrial Revolution in London, where it looks like the Templars have a pretty firm grip on the city, the country, and the British Empire. It wasn't always that way; there used to be Assassins in London.

In the eighteenth century, the London Brotherhood was basically led by two people: a man known only as Miko, and Edward Kenway. They met shortly after the latter returned to London from the West Indies, and for a time it seemed like the English Assassins would be stronger than ever.

Miko was a bit of a free spirit; he roamed all over Europe, searching for Pieces of Eden, making connections and lending aid to various regional Brotherhoods. I'm not sure if he was ever officially designated as a Mentor, and in any case, he and Edward weren't much for that type of ceremony. What Edward brought to the table was stability. He used his charm to make connections in the city, in both high society and the criminal underworld.

Edward was murdered in his own home, betrayed by one of his business associates who was actually a Templar. Miko kept about his business as best as he could, but was also killed by a Templar: Edward's son, Haytham. With those two out of the picture, the Templars had a clear path to control London.

In the here and now, the Brotherhood's seen better days. The Templars won a major victory in 2000, and nearly wiped all of us out. But we've been rebuilding, slowly but surely. We are establishing new Brotherhoods in cities all over the world. We have a new network to stay in touch with each other. And we have people like you, our digital dataminers. You might not have knives strapped all over you, but you're making a difference, and I'm grateful.

(I'd be grateful if we could come up with a new term for us that isn't "Brotherhood." Tens of thousands of years fighting for progressive and free thought, and we're still stuck with that? –RC)

Retrieved from "https://assassinscreed.fandom.com/wiki/Database:_The_Assassin_Brotherhood?oldid=879313"
Community content is available under CC-BY-SA unless otherwise noted.