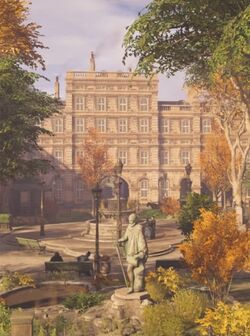 The Royal Hospital of St. Bartholomew is the oldest hospital in all of London. It was built in the year 1123 by a travelling entertainer turned Anglo-Roman monk named Rahere. The story goes that Rahere fell ill while on a pilgrimage to Rome and vowed to found a hospital if he survived and returned home safely. You know, that old story. The number of hospitals built that way is astounding.

The most notorious physician to work at St. Bartholomew was Dr. Rodrigo Lopez, appointed to the hospital in 1562. He would go on to become Queen Elizabeth's chief physician. He was arrested in 1594 for attempting to poison the Queen, and was hanged, drawn, and quartered in June of that year. The scandal, combined with Lopez's Judaism, reignited a trend of Jewish villains in theatre, including a revival of Christopher Marlowe's The Tragedy of the Rich Jew of Malta and most notable, William Shakespeare's writing of The Merchant of Venice.

When the cholera epidemic hit London in 1831, St. Bartholomew's Hospital refused to admit cholera patients - you know you're in bad shape when even the hospital says "no, thank you!" Instead, cholera patients were kept in a nearby house which was demolished following the outbreak.
A medical school was built as an extension of the hospital a few years later. The facilities were state-of-the-art, and featured a library, medical and chemical theatres, an anatomy museum, and dissection rooms.

Retrieved from "https://assassinscreed.fandom.com/wiki/Database:_St._Bartholomew%27s_Hospital?oldid=879060"
Community content is available under CC-BY-SA unless otherwise noted.