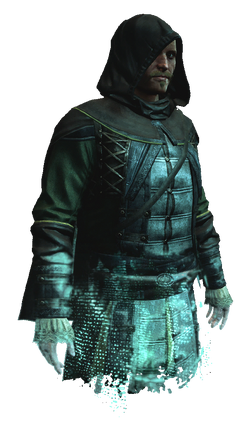 Born in England, the passionate, creative, yet incredibly gullible Vance Travers, found a life for himself amongst the Assassin's Brotherhood in the West Indies, where he ran a successful smuggling enterprise, with his older brother, Upton.

Business took a turn for the worse after he met and fell in love with the Templar, Jing Lang, who persuaded him to divulge knowledge of the location of buried treasure with which he and Upton planned to fund their retirement.

Paranoid, Travers developed delusions that his brother plotted to steal his treasure and Jing's heart. He broke from the Creed and, after a failed attempt at fratricide, was killed by Edward Kenway.

(Note: Maybe we could work it from Jing's perspective. -ML)

Retrieved from "https://assassinscreed.fandom.com/wiki/Database:_Smuggler_Vance?oldid=718587"
Community content is available under CC-BY-SA unless otherwise noted.