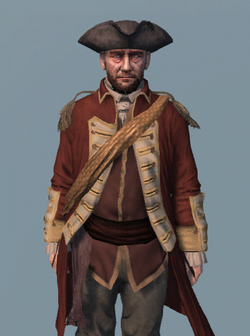 Silas Thatcher was the nephew of a well-to-do London merchant who purchased a commission for him in the British Regulars when he was quite young. He was sent to the colonies in 1750, poor man, where he was posted at the defenses along Boston Neck.

You won't be surprised to learn that Thatcher had a mean streak - few men wanted to serve under him, which might be what led to him being posted in Boston in the first place. (Living in the colonies was regarded as something akin to exile at the time. Actually, come to think of it, not much has changed.) Men who advanced under Thatcher's command were noted for their cruelty - like his personal assistant "Cutter" - which even you might have guessed is a nickname, meaning 'one who likes to cut things - preferably people'. Not what I look for in a PA, but there you go.

At the time, pay in the army was notoriously bad, and soldiers would often pick up odd jobs in their spare hours to make ends meet (this made them rather unpopular in Boston, where unemployment was rather high). However, Thatcher found something he enjoyed much more - demanding protection money from merchants in Boston. Not only that, but he dabbed in theft, fencing stolen goods, and the slave trade - a real Renaissance man - capturing the local Indigenous people and selling them off to the highest bidder.

Which is what he was doing when Haytham found him.

Retrieved from "https://assassinscreed.fandom.com/wiki/Database:_Silas_Thatcher?oldid=804079"
Community content is available under CC-BY-SA unless otherwise noted.