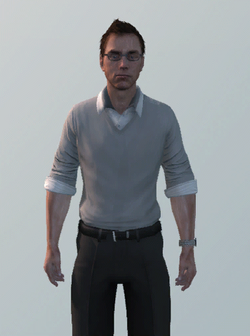 Shaun Hastings is a one of the few Assassins who wasn't born in raised to join the order. He was recruited as a teenager after his investigation into Abstergo Industries and made him a target for the Templars.

You may think he's an arrogant bastard, but that's only because he's smarter than you and like a less-than able teenage girl you find yourself not yet secure enough to move past your inherent and powerful feelings of joyless jealousy and simply appreciate me for who I am.

Now - make me some tea, would you?

Retrieved from "https://assassinscreed.fandom.com/wiki/Database:_Shaun_Hastings_(Assassin%27s_Creed_III)?oldid=804100"
Community content is available under CC-BY-SA unless otherwise noted.