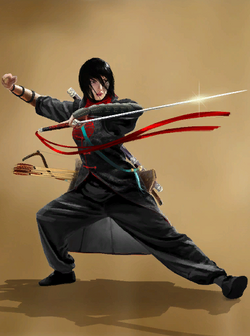 Shao Jun is an Assassin from China, and one of the last Assassins to meet Ezio Auditore before his death.

In 1521, the Assassin Order used the confusion surrounding Zhengde's death to infiltrate the emperor's compound and free some of the concubines, Jun among them. She immediately became an Assassin - but never forgot the women she'd been forced to leave behind. Years later, she returned to the Imperial Palace to free the remaining concubines, only to find that they had been killed by Zhengde's successor, Jiajing.

Jiajing's response to the second attack on the Imperial Palace was swift and brutal, and caught the Assassins unprepared. The Brotherhood in eastern China was decimated. Shao Jun and her mentor survived, but were forced to flee Asia entirely. They travelled to seek the advice of Ezio Auditore - but only Shao Jun would finish the journey, arriving in Florence in 1524, shortly before Ezio's death.

Retrieved from "https://assassinscreed.fandom.com/wiki/Database:_Shao_Jun_(Assassin%27s_Creed_III)?oldid=855050"
Community content is available under CC-BY-SA unless otherwise noted.