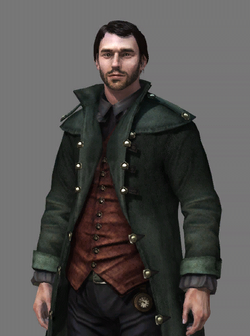 When Paul Revere and William Dawes left Lexington on their way to Concord, they were joined by Samuel Prescott - a young doctor from Concord. Prescott was a member of the Sons of Liberty, a natural choice for an anti-British night-time ride.

Prescott was in Lexington that night to visit his fiancée - I assume that's who we saw run off. He was intending to return home late - a happy coincidence for Revere and Dawes. Prescott knew the area well, so when the three men were stopped by British troops, it was Prescott who managed to elude his pursuers and reach Concord to sound the alarm.

Here's the strange thing - after that night, well, Prescott sort of disappears. I have a record that he may have died as a British prisoner in Halifax in 1777, but it's far from clear-cut. I suppose he could have left Boston with the British on Evacuation Day, but how he was captured and when - I have no idea.

And those are four words I never thought I'd say.

Retrieved from "https://assassinscreed.fandom.com/wiki/Database:_Samuel_Prescott?oldid=804105"
Community content is available under CC-BY-SA unless otherwise noted.