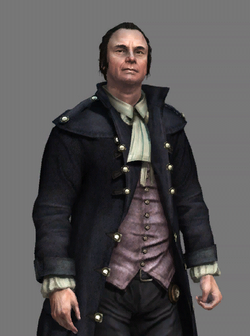 Samuel Adams was a Boston Lawyer, a signatory of the Declaration of Independence, and a prominent political figure during the lead up to the American Revolution. I think that's put your little life into perspective, hasn't it?
Adams was born in Massachusetts, the son of another Samuel Adams, who was a well-off merchant. Adams (the younger one) went to Harvard, graduating in 1740. He went into business for himself, but was a dismal failure and ended up taking a job in the family brewery. A lot of men turn to breweries when their businesses fail, but in rather a different way. And that was fortunate for his historical legacy, since his relationship to beer may be the only reason most Americans have even heard of him.

Adams was elected to the Massachusetts Legislature in 1765, which was the beginning of his political career. He was a staunch supporter of Colonists' Rights (mainly the ever popular arguments over whether British Parliament had a right to impose taxes), but wasn't pro-independence - at least not at first (I think it's fair to say he changed his mind later.)

Adams is often portrayed as an angry radical - but that's a bit of a biased picture. Adams disliked vigilantism, for the most part (though he approved when a mob forced Boston's stamp collector to resign, so perhaps he only disliked SOME vigilantism). In later years, when Adams was in Congress, he refused even to join a political party because he found the idea divisive (a sentiment which he shared with George Washington, incidentally).

However, Adams' reputation for being a rabble rouser is somewhat understandable. He was a representative for the town of Boston after the Boston Massacre, and succeeded in having the Regulars kicked out of town. He spoke at the Old South Meeting Hall just prior to the Boston Tea Party, and it's said he gave the signal for the dumping of the tea (though there's some debate over whether he was involved, which I'm happy about, as a gentleman does not waste tea).

Adams was infamous enough that he had to leave Boston for Lexington in 1775 - to avoid arrest by the British who considered him a troublemaker. When the siege of Boston began the Massachusetts Governor offered to pardon any rebels who would lay down their arms - EXCEPT Adams, and John Hancock. Overall, Adams was certainly a thorn in the side of the British - though what puzzles me is why some Americans think being an angry revolutionary was a bad thing. It got you where you are today, didn't it?
Actually, hang about, yes - maybe I see their point after all.

Retrieved from "https://assassinscreed.fandom.com/wiki/Database:_Samuel_Adams?oldid=804107"
Community content is available under CC-BY-SA unless otherwise noted.