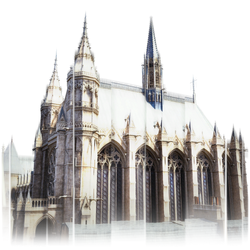 Also - Baldwin II? So Baldwin the first suffered through life with that godawful name then decided to give it to his son, as well?

Some people.
--
The edifice is a unique example of seemingly invisible stonework since its windows take up all the space between the structural supports. Perhaps more extraordinary is that it was built in just two years, between 1246 and 1248. **
--
** Believe me, I'm very familiar with European builders. Nothing else in their history has ever been built in just two years. Not even a small wall or miniature water feature.
--
It is set on two levels: the lower level was for Parisians and the people of the court; the upper level was for the king and his family.

On important occasions, the king presented the Crown, taken from the reliquary to which he alone had the key, to the kneeling congregation. It came close to being demolished during the Revolution, but would eventually be used as a flour store, a club room for the Section de la Cité, and finally a store for archiving old papers, which effectively saved it, since it served the people.

It bore a sign proclaiming 'National property, for sale' until 1837. All the sacred vessels and precious books had long since disappeared.

Retrieved from "https://assassinscreed.fandom.com/wiki/Database:_Sainte-Chapelle?oldid=775799"
Community content is available under CC-BY-SA unless otherwise noted.