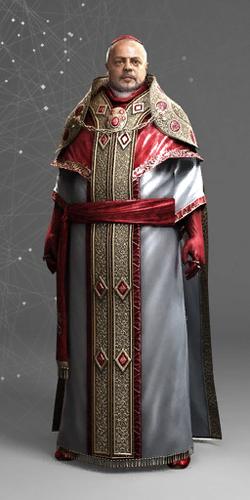 Date of Birth: 1431.
Profession: Pope, Leader of the Italian Templars

After his failure to return with a powerful weapon from the Vault beneath the Vatican, Rodrigo seems to have been plagued by of ill omens.

In June of 1500, a steeple from the roof of St. Peter's fell, dislodging an iron beam that came clattering down a few feet from the Pope as he walked through the Basilica. The next day, a room in the Vatican collapsed around him. Everyone else in the room was killed, only a piece of canopy wedged above the Pope saved his life. Then, a few weeks later, he ended up in bed with a severe fever. Finally, at the end of the year, while hunting, he was charged by a stag.

After each of these incidents, Rodrigo seems to have left more and more to Cesare, content to collect indulgences to help fund the Captain General's military campaign and to kill off cardinals if the florins weren't coming fast enough to restock the Papal treasury. He also seemed to take great delight in the women of Rome, engaging in several "bodily feasts" alongside his daughter, Lucrezia.

In July of 1503, after the death of Juan Borgia the Elder, a journal entry made by the new Papal secretary suggests that a worried Rodrigo moved "a strange apple" he had kept inside a locked desk out of the Castello.

Retrieved from "https://assassinscreed.fandom.com/wiki/Database:_Rodrigo_Borgia_(Brotherhood)?oldid=809547"
Community content is available under CC-BY-SA unless otherwise noted.