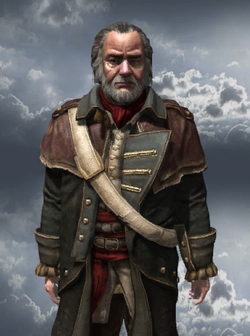 Robert Faulkner is probably the most storied members of the Assassin's navy - though he was never formally named to a position above First Mate.

Robert Faulkner was the fourth generation of his family to be a seaman (I'm glad I didn't say that out loud) - but the first in his family to be recruited to work for the Assassins. He started off in the Royal Navy, but finding his career stalled (partly due to his inability to purchase commissions), he left to work for the United Company of Merchants.

In 1753, Faulkner disappears from the historical record, presumed dead - but that's because he joined the Assassins, as first mate of the flagship, the Aquila.

Faulkner was much sought after as a mariner - recruiting him was quite a coup for the Brotherhood. He had a reputation for having a disciplined crew and an almost uncanny knack for avoiding trouble - not to mention predicting the weather. Whether through years of experience, or some other more mysterious ability (because I totally believe in those) Faulkner would know when a storm (or calm) patch of sea was coming in, and could use it to his advantage. Imagine that! A natural weatherman who could accurately predict the weather! The world would never see his like again.

Faulkner served on board the Aquila until it was nearly destroyed in 1768, always deferring when asked to become the captain - he never gave his reasons why. However, his love for the ship was quite touching - he had it towed to its location near Boston, despite doubts that it would ever be seaworthy again. Faulkner could have gone back to the sea aboard another ship, but didn't - he stayed close to the ever-deteriorating Aquila and took to drinking, which is where Connor found him.

Retrieved from "https://assassinscreed.fandom.com/wiki/Database:_Robert_Faulkner?oldid=804111"
Community content is available under CC-BY-SA unless otherwise noted.