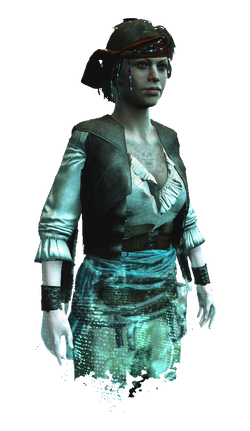 Born in Scotland, Rhona Dinsmore was made for adventure. After suffering the lows of a depressed household (her father absent and her mother an alcoholic) throughout her childhood, Dinsmore left her home in Glasgow in her mid-teens. At nineteen, she found work amongst merchants in Bristol and remained at that post for nearly two years.

By twenty-one, Dinsmore was trapped in a terrible marriage. She fled again and sought refuge in Boston, where she remained for six months, before moving on to the warmer climes of Jamaica. There she found it exceedingly difficult to find work among farmers, and finally took to the sea, ultimately finding her calling within the Assassin Brotherhood.

Notes: RUMORED terrible marriage. Look at the facts. All her patterns after that are those of a con artist, even if her independence IS a little inspiring - ML

Notes: Anyone find confirmation of romantic ties to Hilary Flint yet? -RL

Notes: No, but there's lots of sarcasm. -JM

Notes: There's still room for love in that. The opposite of love isn't hate, it's indifference. -RL

Retrieved from "https://assassinscreed.fandom.com/wiki/Database:_Rhona_Dinsmore?oldid=718584"
Community content is available under CC-BY-SA unless otherwise noted.