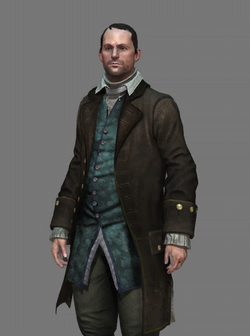 Reginald Birch was a London merchant, the son of another London merchant (who, conveniently enough, also had the last name Birch. It seems it was one of those hard-to-put-your-finger-on things that ran in the family).

Birch started in business for himself at an early age. By the time he was in his mid-20s, he already owned several merchant ships, mainly dealing with the tea trade to the American colonies. That's pretty good going, seeing as by the time most people are in their mid-20s they don't even own a shirt. I have him as part owner of the Providence, among others. Later in life, Birch also owned several businesses in and around London. He was a member of White's, which was a posh Gentleman's club in London - and generally a well-known and respected man-about-town.

From what I can tell, Birch met Haytham Kenway while working for his father, Edward. they were introduced at White's while Haytham was still quite young. Birch would eventually take over Haytham's education - tutoring him while on a tour of Europe in the 1730s. From what we've seen in the Animus, it seems their friendship continued into adulthood - with them working together as members of the Assassins.

Retrieved from "https://assassinscreed.fandom.com/wiki/Database:_Reginald_Birch?oldid=804116"
Community content is available under CC-BY-SA unless otherwise noted.