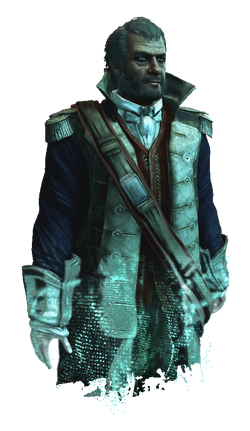 Commodore Peter Chamberlaine sailed into the history books on the coat-tails of Woodes Rogers, privateer captain and Governor of the Bahamas. Though charged with the task of helping Rogers carry out his reforms and issuing King George's pardon, Chamberlaine had an irrational and burning hatred for his civilian commander, and flouted Roger's orders as often as possible.

Gruff and humorless, Peter Chamberlaine was nevertheless respected by his men as a man of fortitude and cunning, and his willful defiance of civil authority only bolstered his reputation among the rank and rile.

(Let's get rid of this man early. Our cast is getting too large. --OG)

Retrieved from "https://assassinscreed.fandom.com/wiki/Database:_Peter_Chamberlaine?oldid=796888"
Community content is available under CC-BY-SA unless otherwise noted.