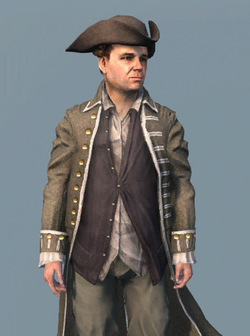 You'll have heard of Paul Revere's Midnight ride, of course - he was one of several riders sent to warn Lexington and Concord of a coming military raid on April 18, 1775. Revere's role in the revolution was larger than that, however. He was a member of the Sons of Liberty and the Continental Congress, and a participant in the Boston Tea Party.

By trade, Revere was a silversmith, and one of the most skilled craftsmen in the colonies. He also did copper plate engraving - most notably, the image of the Boston Massacre that depicts British soldiers firing into the unarmed crowd at point-blank range. A very effective piece of propaganda. You get very little copper plate propaganda these days. It's a dying art.

Revere was also a shrewd businessman and he went where the money was. When silverwork wasn't paying the bills, he made dental tools, and when gunpowder was scarce during the Revolutionary War, he built a gunpowder mill. After the war ended Revere expanded his business into bell forging, eventually making the bell that hangs in King's Chapel, a Boston landmark.

Retrieved from "https://assassinscreed.fandom.com/wiki/Database:_Paul_Revere?oldid=804128"
Community content is available under CC-BY-SA unless otherwise noted.