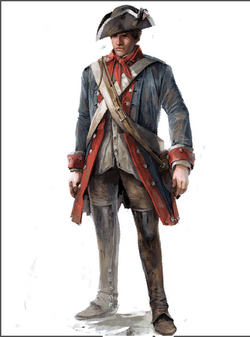 Patriots were Colonists who united against the British Government in the Revolutionary War. Although, at the time of the Revolution 'Patriot' was something of a negative term. What we call Patriots today were more likely to be called "Whigs" – or, if you were a Loyalist, "rebels".

The Patriot motto was "No Taxation without Representation" – a great phrase for rabble-rousing, though a poor choice of catchphrase for, say, a gameshow host.

It's also a phrase that requires a bit of unpacking for a modern audience (By which I mean you, Desmond). The colonies didn't elect representatives to the British legislature, and because of the travel distance between Britain and America, and the distinct lack of aeroplanes, it wouldn't have been practical. Instead Patriots wanted to be governed by representatives within the colonies. Of course, they did have legislatures already – but those were rather prone to being shut down by British-appointed Governors whenever they didn't behave properly (read: do exactly what the governor wanted).

It's hard to know how many people in the colonies were Patriots, the best guess is between 40 and 45% of the population. The rest were either declared Loyalists, or people who decided to remain tactically neutral (probably a wise choice, given that both sides were known for seizing the property of their enemies).

Retrieved from "https://assassinscreed.fandom.com/wiki/Database:_Patriots?oldid=804134"
Community content is available under CC-BY-SA unless otherwise noted.