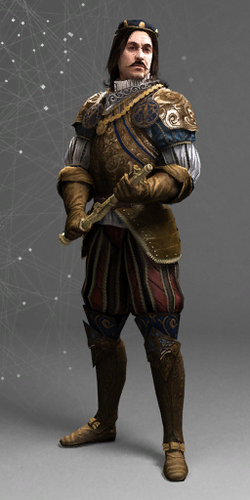 The unexpected crowning of his distant cousin Louis XII in 1498 propelled Octavian, the Baron de Valois, to the front of the ranks in Louis's new Italian campaign.

According to the accounts of the King's secretary, the Baron had "only formal training, no actual field experience". He then quipped: "The things one does for one's family".

Valois encountered Cesare and Juan Borgia when they arrived in France to court Cesare's future wife Charlotte. They spent a month together at court, at which point the Baron left for Italy.

Several letters were exchanged between the two in cipher text, only recently cracked, discussing something repeatedly referred to as "our plans for Italy", the King of France was mentioned as an accomplice to these plans.

The Baron de Valois marched into Rome with his men in 1500. For what purpose, it remains unclear. At that point, however, Bartolomeo and his men attacked.

Retrieved from "https://assassinscreed.fandom.com/wiki/Database:_Octavian_de_Valois?oldid=807029"
Community content is available under CC-BY-SA unless otherwise noted.