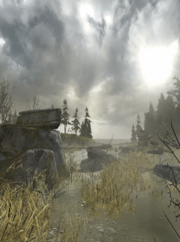 Oak Island is in Mahone Bay on the eastern shore of Canada. The island features prominently in local pirate legends - it seems the 'secret' treasure Kidd buried here didn't remain as secret as he would have liked, which of course was very secret, hence the word 'secret'.

Treasure hunts first began in 1795, a local teenager spotted a tree with rope burns and a nearby depression in the ground - which he thought was a sure sign that something had been lowered into a pit. He and some friends started to dig, but quickly got beyond their depth and resolved to come back with better tools. Subsequent digs have happened in 1803, 1862, 1866, 1893, 1909, 1931... well, you get the idea - but nothing's ever been found. Six people have died hunting for the supposed treasure.

Over the years, theories about the origin of the 'Money Pit' have been abundant: it's nothing more than a sinkhole, treasure was left in the pit - either by William Kidd, or the Freemasons, or the Templars.

Here's my personal favourite - Francis Bacon used the pit to store the original documents proving that he wrote the works of William Shakespeare. I'm almost sorry that one isn't true.

Retrieved from "https://assassinscreed.fandom.com/wiki/Database:_Oak_Island?oldid=860806"
Community content is available under CC-BY-SA unless otherwise noted.