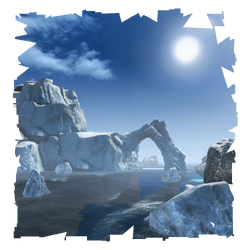 While ancient Norse settlements have been found in Newfoundland and other parts of North America, it was not until Christoffa Corombo's famous voyage in 1492 that there was any significant contact across the Atlantic Ocean. The European powers raced to colonize the Americas.

(Abstergo insists on spelling "Christopher Columbus" like that. It has something to do with Subject 17, but beyond that I don't know. It's maddening. –V.)

The North Atlantic, with its colder climate, made this process difficult. The cold winters as well as the resistance of indigenous people resulted in the failure of many early European settlements.

By the 18th century, however, colonies were well-established and trading routes across the ocean were common. Even so, the most northerly regions were still relatively unexplored, with ice blocking the way of even the most adventurous explorers.

Retrieved from "https://assassinscreed.fandom.com/wiki/Database:_North_Atlantic?oldid=719007"
Community content is available under CC-BY-SA unless otherwise noted.