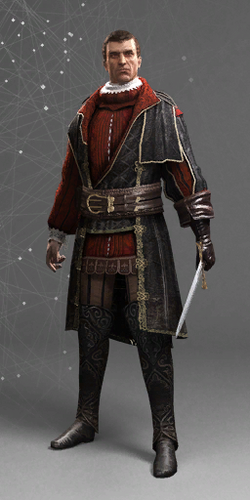 These cynical words were written by Niccolò Machiavelli, one of the greatest minds of the Renaissance. Considered a pioneer of Realist philosophy, he believed that all men are evil and will act upon their vicious nature, if given the chance.

The third son of a Florentine attorney, Machiavelli was tutored by his father in grammar, rhetoric and Latin. In 1494, he entered government service as a clerk and an ambassador. Made a member of the Florentine diplomatic council, he was sent to the courts of France, Spain and Rome between 1499 and 1512. It was during this time that he met Cesare. Immediately taken with the young Captain General, Machiavelli wrote: "I can find no fault with him." Machiavelli followed Cesare, learning his approach to war, until 1500, when he became de facto leader of the Assassins.

From 1500-1503, he settled in Rome, although little of known of his activities there.

In 1503, Machiavelli was put in charge of the Florentine militia and the city's defence. He recruited citizens for his militia, preferring men who had a stake in Florence's continued success to dispassionate mercenaries. His strategy seemed to work in 1509, when Florence defeated Pisa.

Machiavelli continued to participate in Florentine government after the Medici family was chased out. But, when the Medici returned, they arrested and tortured him. He was accused of conspiring against them.

Unable to find any wrondoing, the Medici exiled Machiavelli. He retired to his estate in Santa Andrea, where he wrote his famous works "The Prince", "The Discourses on Livy" and "The Florentine Histories".

Machiavelli died in 1527. His place of burial remains unknown.

Retrieved from "https://assassinscreed.fandom.com/wiki/Database:_Niccol%C3%B2_Machiavelli_(Brotherhood)?oldid=807025"
Community content is available under CC-BY-SA unless otherwise noted.