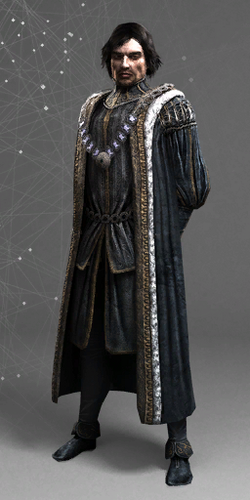 The right-hand man of one of the most notorious hands-off killers in history, Micheletto was usually the last thing Cesare's victims saw.

A deadly import from Valencia, Spain, he grew up with Cesare, slightly his elder and always his protector. Not only Cesare's personal executioner, he also was a condottiero, leading armies for Cesare and, at one point, he was the governor of Piombino.

And many more occurred that go unrecorded here. Micheletto was notorious for strangling his victims quietly and disposing of the bodies.

Retrieved from "https://assassinscreed.fandom.com/wiki/Database:_Micheletto_Corella?oldid=807022"
Community content is available under CC-BY-SA unless otherwise noted.