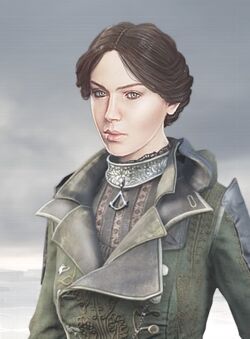 Born into relative comfort, Jacob's granddaughter Lydia was initially reluctant to enter into the 'family business', preferring to concentrate on her studies. However, it was this very education that showed her just how much influence the Templars still held over the history of the world. After seeing family and friends fall in the family battle, she decided to join the fight.

Lydia's parents were often engaged in Assassin missions across the continent, so the role of instructor fell to her grandfather Jacob and great-aunt Evie. She became a very well-balanced Assassin, one who could carefully assess any situation and strike with precision, but one who could also think for herself and improvise when a plan fell through.

Lydia fell in love with a fellow Assassin named Sam Crowder and they were married shortly before the outbreak of the First World War. Assassins from all across Europe were pulled in every direction, in order to have a presence in every theatre of war and seat of power. While Sam, along with many others from the British Brotherhood, enlisted in the army, Lydia took it upon herself to stay and watch over London.

After securing the elder Fryes safely away in the countryside, Lydia returned to London, and worked alone to protect it not only from German spies and the manipulative British Rite of the Templar Order, but also from any new and strange threats that sought to take advantage of the chaos.

Retrieved from "https://assassinscreed.fandom.com/wiki/Database:_Lydia_Frye?oldid=880811"
Community content is available under CC-BY-SA unless otherwise noted.