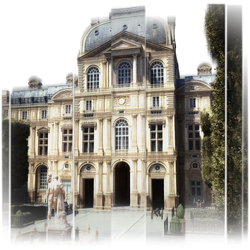 The Louvre could be referred to in the plural, since there have in fact been several Louvre palaces since Philippe-Auguste inaugurated it as a fortress. Each new regime sought to leave its own particular mark on the edifice, starting with Charles V "the Wise." *
--
* "The Wise". I think that's the nickname I'd go for. Better than that guy called "The Fat" or the other one who wanted to be known as "The Severe". Two of the worst nicknames in history.
--
France's monarchs never ceased to embellish and improve the "Leovar" which, in Old Saxon, means fortified camp, and which would become "Louvre". And so this barbarion gourbi (or shack) became the largest palace in the world. Expanded and improved by Francis I (who had several sobriquets including "Francis of the Large Nose")** as well as by Henry II, and later Louis XIV.
--
** Okay. "Of the Large Nose". We have a new worst nickname. "Hi, they call me King of the Large Nose." Well, be still, my beating heart!
--
Despite its impressive stature, the palace was snubbed by France's kings who, starting with Louis XIII, preferred Versailles. The courtyard known as the Pavillon de Sully is overseen by a large clock. Louis XVI was the last monarch to use the palace as a household.

Retrieved from "https://assassinscreed.fandom.com/wiki/Database:_Louvre?oldid=719580"
Community content is available under CC-BY-SA unless otherwise noted.