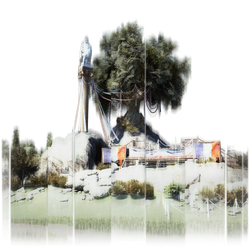 The name of this green space (literally "Field of Mars") is a tribute to the Greek God of war, since its lawns were used by the French military as an exercise ground. Surrounded by ditches and trees, it was nevertheless let open to the civilian population, and even served as an occasional playground for Parisian balloonists. It was thus a favorite leisure spot in Paris, and would be the scene of the Revolution's key moments starting from 1790.

On July 14, 1790, despite heavy rain, a crowd of some 300,000 attended the "Fête de la Fédération" in honor of the anniversary of the Storming of the Bastille.*
--
* Sounds lovely! We must visit!
--
In November 1793, former mayor of Paris Jean-Sylvain Bailly was tortured for two hours by a frenzied mob in one of the field's ditches, before being beheaded by a purpose-built guillotine: "His execution was intended as an expiatory ceremony." **
--
** Actually, I'll leave it.
--
On June 8, 1794, the Champ de Mars also hosted the Feast of the Supreme Being, devised and celebrated by Robespierre, subsequently frowned upon as a "parody" by his Jacobin colleagues, and which would hasten his downfall.

Levelled and extended, it would offer Gustav Eiffel the perfect spot for his giant steel structure 140 years later. Thereafter, the Champ de Mars served as the setting for princely weddings, national workshops and horse racing, followed by concerts and imposing firework displays in the 20th century.

Retrieved from "https://assassinscreed.fandom.com/wiki/Database:_Le_Champ_de_Mars?oldid=719521"
Community content is available under CC-BY-SA unless otherwise noted.