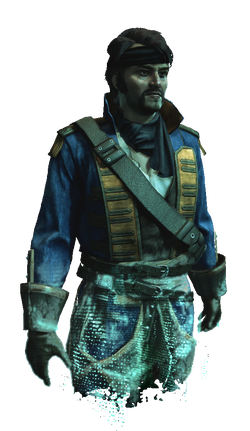 A close a friend and confidant of Benjamin Hornigold, little else is known about Josiah Burgess. Our records indicate that he was a pirate for a few years, prior to 1718, before he surrendered to the king's emissaries. It's likely he fell into pirate-hunting after that, as most reformed ruffians were wont to do.

(Note: This guy's such a minor character, we might as well use him as we see fit. If he dies earlier or later, fine by me. You might even give him a crazy secret or a strange tattoo, just to add a little mystery. Maybe he inked an entire treasure map on his back? -ML)

(Note: I'll move his death date, but I'm NOT putting a treasure map tattoo on him. Come on... -DM)

Retrieved from "https://assassinscreed.fandom.com/wiki/Database:_Josiah_Burgess?oldid=718572"
Community content is available under CC-BY-SA unless otherwise noted.