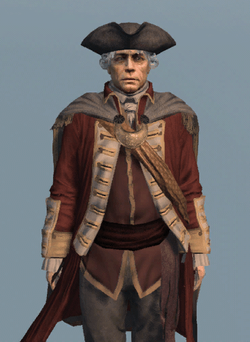 In 1754, John Pitcairn was a young captain in the British Marine corps. He fought in the French and Indian war, but I can't find much about his postings. He's listed as being on the HMS Lancaster during the capture of Louisbourg - that's in Canada. No record of him being on the 'American' side of the colonies but it seems he did some covert work as well - that would explain the lack of details.

Pitcairn was promoted to Major in 1771, and he gained a reputation for being well-liked by his subordinates - and praised by his enemies. That's a difficult trick to pull off. Maybe he had a lovely smile.

When Thomas Gage sent British troops to Lexington and Concord, he picked Pitcairn for the job, figuring the rebels would listen to him when it came time to talk. Instead, Pitcairn was man in charge when his Marines killed 8 militiamen at the Battle of Lexington, starting the Revolutionary war - severely damaging his reputation as a peacemaker. Multiple deaths can do that.

Pitcairn's report on the battles said he had ordered his men not to fire unless the rebels fired first, but that didn't stop the rumours that he'd commanded the attack. History's taken a kinder view - Pitcairn's now considered, as one Patriot described him, "a good man in a bad cause".

It's historically debated whether Pitcairn went to Lexington and Concord to seize rebel weapon stores, or to find and arrest John Hancock and Samuel Adams - who were hiding in Lexington at the time. Possibly it was a little of both. Pitcairn's story is that he wanted to find Adams and Hancock to negotiate with them - and he would have been the ideal person to do it. I'm still puzzled as to why he'd try negotiating a truce with an army at his back, though. It sort of sends the wrong messages, don't you think?

Retrieved from "https://assassinscreed.fandom.com/wiki/Database:_John_Pitcairn?oldid=778676"
Community content is available under CC-BY-SA unless otherwise noted.