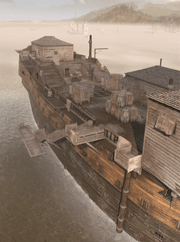 The British took so many prisoners during the Revolutionary War that they quickly ran out of places to put them all. Prisons in New York (like the Bridewell) were full and the British took to using sugar houses, and pro-rebel churches in the city.

In the harbour, decommissioned war ships were put to use as prison ships, the most well-known being the HMS Jersey. The Jersey had - and earned - the nickname 'Hell'. I wonder if you can guess why. Conditions below decks (where the prisoners were kept) were crowded - a thousand men crammed together without light, sanitation, or proper ventilation.

About a dozen prisoners died every day - from smallpox, yellow fever, malnutrition, and torture by the guards. I'm not even going to begin describing the food; well, alright, I'll begin... "inedible" and "worm-infested". But I won't finish.

The British sentiment was the rebels were traitors and didn't deserve any better.

At least 11,000 people died on board the prison ships - more than rest of the war put together. After the British left New York, the US Navy found mass graves in the mud at the edge of the harbour. Those remains have since been placed under a monument in Brooklyn, where Fort Putnam used to be.

Retrieved from "https://assassinscreed.fandom.com/wiki/Database:_HMS_Jersey?oldid=666748"
Community content is available under CC-BY-SA unless otherwise noted.