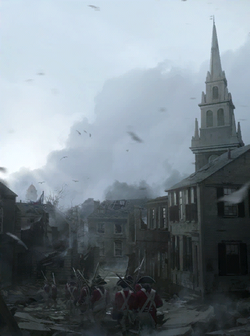 The Great Fire destroyed as much as a quarter of the buildings in New York, and caused a housing crisis that lasted as long as the British occupation of the city.

New York at the time was largely deserted - first Loyalists had moved out as the Continental Army moved in, and then the Continental Army left and many of the Patriots went with it. Many buildings were empty, and the conditions were dry. So when the flames started they spread quickly, ripping through the poorer sections of the city and seeming to spread to several places at once. This is probably part of what caused rumours that the Continental Army was responsible - such a big fire couldn't have been an accident.

Except it seems it was. There's no proof that the rebels were involved at all. Washington had considered setting fire to the city as he retreated, but Congress had voted against it. Washington was fairly clear in his writings about the event: "Providence, or some good honest fellow, has done more for us than we were disposed to do for ourselves." That is - 'Wasn't us! But I'm not sorry it happened...'

Retrieved from "https://assassinscreed.fandom.com/wiki/Database:_Great_Fire_of_New_York?oldid=804185"
Community content is available under CC-BY-SA unless otherwise noted.