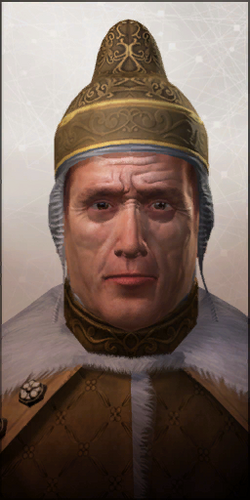 Doge of Venice from 1478 to 1485, Giovanni Mocenigo accomplished two things.

He ended Venice's Turkish war through the Treaty of Constantinople in 1479. Basically the treaty was a huge white flag giving Turkey Venetian territory and an annual tribute of 10,000 ducats, in order to prevent the Turks from taking over Venice. Not exactly a win.

He killed the Pope. The end of Sixtus IV was nigh when Mocenigo attacked Ferrara, starting the Salt War. Ferrara had challenged Venice's ownership of several salt mines (apparently humans, like hamsters, need ample quantities of salt), so Venice used this pretext to enter into a war that was really about territorial expansion.

At first, the Pope fought alongside Venice, but then, once he realized Venice's territorial ambitions, switched sides. When Venice won, through the Treaty of Bagnolo, it gained significant territory, enlarging the Republic to the largest it would ever be.

When the Pope read the Treaty, he flew into a rage, and by the next day, he was dead.

Although there were rumours that the Pope's death wasn't entirely caused by reading the Treaty, they have gone unproven.

Retrieved from "https://assassinscreed.fandom.com/wiki/Database:_Giovanni_Mocenigo?oldid=809537"
Community content is available under CC-BY-SA unless otherwise noted.