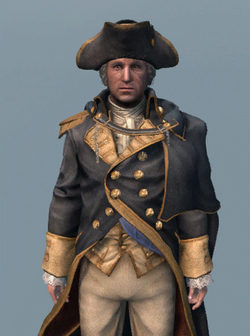 Here's a name even you should recognise - George Washington, who will go on to be the leader of the army during the American Revolution, and the first President of the United States.

I was going to say you probably know everything I'm going to tell you but that would be a lie. What you know is that George Washington has a lot of things named after him, and anything else you learned in school you forgot because you thought you'd never use it in real life. (You should call your history teacher and tell her she was right all along.)

George Washington was the son of a planter from Virginia. He was raised with little education, but was ambitious, teaching himself mostly from books.

Washington started in business early, speculating on land starting at the age of 18. When he was 20, his older brother died, leaving him the heir of the family plantation at Mount Vernon - where he lived until his death, and where you can still visit his grave today.

Washington got his military start during the French and Indian War, leading an expedition to Fort Duquesne in 1754 - a destination he never reached, having surrendered at Fort Necessity. The next year, Washington headed to Fort Duquesne again, this time as a guide for Edward Braddock during the ill-fated Braddock Expedition. Washington went as a volunteer, hoping that working for Braddock would get him a track to military promotion. Though the battle was a rout, Washington earned credit for organizing the retreat, and later that year he was made a Colonel in charge of the Virginia militia.

Washington completely revamped the militia, with hopes that under his organization and training they would be accepted into the British military. They never were. Washington resigned his post in 1758. I won't say the snub led to his contempt for the British, but snubs rarely help.

By the late 1760s, Washington had become active in political life - taking on a role in the Virginia House of Burgesses. He went on to be a member of the Continental Congress, and when war broke out in 1775, he was Congress's choice to lead the army. At the time Washington said, "I do not think myself equal to the command I am honored with." Which I'm sure inspired complete confidence in everyone who heard it. Imagine if you were on an airplane and the captain opened with that.

It's possible that Washington was being falsely modest, but the fact is this: he wasn't a military genius, and he knew it. (Though I'm sure it hurts your American pride to hear me say he wasn't perfect.) Washington had several narrow misses where the army could have easily been obliterated - at Manhattan, and again at Brandywine - among others.

Washington won an early victory [when] he broke the siege of Boston, but he then made the disastrous move of fortifying New York - a city he couldn't defend without a navy he didn't have. Even you can work that one out. He spent the latter half of 1776 retreating across New York and New Jersey, losing battle after battle, until Christmas, when he pulled off a successful surprise attack [on] the Hessian troops at Trenton.

(And while that battle makes for some famous paintings, and it did rally the flagging confidence of the public, it was a minor victory in the war.)

Washington's lack of skill didn't go unremarked, either. Charles Lee lost faith in him completely - never going quite so far as to disobey Washington's orders, but not following them promptly either then, in 1777-78, Washington had to defend himself against the Conway Cabal, which threatened to replace him with General Horatio Gates.

However, Washington's strength lay in politics, and leading the army was as much about politics as it was about winning battles. Washington had to negotiate between the varying interests of the army, the individual colonies, and Congress - and not just for instructions on how to wage the war, but also for basic supplies for the troops. By all accounts he must have been extremely patient - trying to get politicians to give you anything is like trying to get a dog to give up a bone. (Actually, my money would be on the dogs, who will occasionally listen to reason.)

Whatever the criticisms of Washington's military strengths, the bottom line is that he won (eventually). When the revolution ended, he was the unanimous choice for President, a credit to the fact that he managed to both win the war and not alienate anyone in Congress.

Of course, if you're looking for something to criticize Washington for, you don't have to look far - he ordered the total ruin of Indigenous settlements during the Sullivan Expedition, not to mention he was a plantation owner, which meant he owned more than 200 slaves (And while yes, his will did provide for them being freed - after both he and his wife were dead and wouldn't need them anymore. I don't really consider that particularly altruistic.)

Oh, am I ending on a low note? Sorry, I'm here to teach you history, not soothe your sense of national pride.

Retrieved from "https://assassinscreed.fandom.com/wiki/Database:_George_Washington_(Assassin%27s_Creed_III)?oldid=804031"
Community content is available under CC-BY-SA unless otherwise noted.