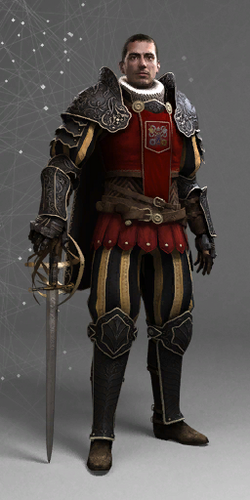 A condottiero from the fierce Orsini family, Fabio was already fighting by the age of eighteen, entering Montepulciano to help the Sienese. In 1498, he partnered with Bartolomeo d'Alviano against the Savelli, a rival family and joined the dark side, marrying Jeronima Borgia, a cousin of Lucrezia. At first, Favio seems to help his new in-laws, but then, in 1499, while Cesare is in Romagna, he frees a friend imprisoned in the Tor di Nona, suggesting his allegiance to the Borgia may have been wavering.

Once his father Paolo was killed by Cesare, he "fled for prudence", then attacked Micheletto's army and lost, becoming an outlaw raiding the countryside. His notoriety put him on a list of bandits published by the Pope.

He continued to wage war for the rest of his short life, dying of a head wound after the battle of Garigliano in 1504.

Retrieved from "https://assassinscreed.fandom.com/wiki/Database:_Fabio_Orsini?oldid=806818"
Community content is available under CC-BY-SA unless otherwise noted.