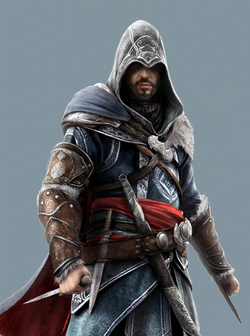 Ezio Auditore da Firenze was a Master Assassin during the Italian Renaissance, as well as being an inheritor to the mysterious ability of "Eagle Vision", and one of your ancestors.

Ezio was something of a playboy in his teenage years, but his life changed in 1476 when his father and brothers were arrested and executed for treason. Ezio tried to save them - but the evidence clearing their names mysteriously disappeared in the hands of a family 'friend'. Instead they were hanged as Ezio looked on.

Ezio fled with his mother and sister to Monteriggioni, where he sought refuge with his uncle, Mario Auditore. Ezio had originally intended to continue on and settle in Spain, Mario had other ideas. He was the leader of the Italian Assassin Brotherhood and spent the next several years training Ezio and convincing him to help fight the Templars responsible for the deaths of his father and brothers.

Ezio spent the next decade assassinating his way through the Templar ranks, eventually cornering the Templar Grand Master, Rodrigo Borgia, in Venice in 1487. Borgia got away, but Ezio was able to recover an Apple of Eden, and was formally inducted into the Assassin Order.

After several setbacks over the next few years, Ezio travelled to Rome in 1499 to confront Rodrigo - who by then had become Pope Alexander VI. After defeating Rodrigo (but sparing his life), Ezio opened a hidden vault under the Sistine Chapel. There he discovered a message left by the First Civilization, warning of a catastrophe that would threaten to wipe out humanity. (Yes, that would be the one we're facing right now.)

Over the next 20 or so years, Ezio worked at strengthening the Italian Assassin Brotherhood, and fighting the Templars (which is sort of what we do). One of his greatest accomplishments would be discovering a hidden library belonging to Altaïr, hidden under the former Assassin stronghold at Masyaf, and containing another message from the First Civilization. He retired from the brotherhood shortly thereafter - which is what we call 'ending on a high note'.

He was terrific at jumping, too.

Retrieved from "https://assassinscreed.fandom.com/wiki/Database:_Ezio_Auditore_(Assassin%27s_Creed_III)?oldid=836404"
Community content is available under CC-BY-SA unless otherwise noted.