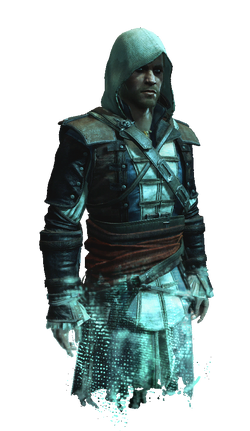 Edward James Kenway was born on the 10th of March in Swansea, Wales, to Bernard Kenway of Manchester and Linette Hopkins of nearby Cardiff. By Edward's 10 birthday, his father had moved the family to a small farm just outside Bristol, a nearby port town in the southwest of England.

(Note: Not sure a WELSH leading man would be interesting. Can we do ADR to replace his voice? I know a great actor from London who'd be perfect. Speaks in a gravely RP accent. -DM)

This relocation had a depressing effect on young Edward's mood. He grew restless from a lack of contact with old friends and struggled to find an outlet for his limitless energy. By his teens he was spending more and more time in the city away from his farm, where the lure of excitement overrode prudence. By age 16 he had substituted a career as a successful farmer for a life of hopeless tomfoolery, frequently shirking his responsibilities to his family in favor of rough company.

In late 1711, at the age of 17, Edward met Caroline Scott, a woman of modest but steady means. Their friendship began cautiously, as Caroline's hand had already been promised to the boorish son of a wealthy East India Company executive. But Edward's charms eventually won out, and he and Caroline were married within a year of their meeting; a union that angered her father, and got the whole of Bristol talking.

In the earliest months of their marriage, Edward resolved to do well by his wife and provide for her as he believed a man in his position should. But Edward's grandiose dreams and exaggerated opinion of himself prevented him from taking immediate responsibility for their well-being. And after only a year, he had stumbled back into his worst habits - drinking, fighting and idleness.

It was in this dark period that Edward revived an old idea of joining a privateering fleet sailing for the West Indies, with the aim of making war against the Spanish and collecting unchecked sums of gold and cargo. This, he told his wife, was their path to quick riches. Being a sensible and prudent woman, Caroline discouraged these fanciful ideas.

(Note: Is she a harpy? Does she nag him? Are we meant to hate her, or what? Because I certainly don't want us to feel conflicted about Edward's choices. He's the hero. Let's avoid scenes of him drinking or gambling. --OG)

By the summer of 1712, Caroline understood that her husband's departure was inevitable. She wanted no further part of Edward's reckless plan, and so left him to live with her parents. Stunned by this sudden turn, Edward was determined to earn his fortune fast and prove himself as capable as he always claimed he was. He left for the West Indies barely one month later, where he soon fell in with the privateer Benjamin Hornigold and his quartermaster, Ed Thatch.

Edward spent the first half of 1713 sailing with these two seasoned sailors, on regular sweeps of the windward passage. But that year, fate threw him another upset. With the signing of the treaty of Utrecht, all hostile actions between the major empires came to an end and the prospects of British privateers dried up. Now poor, unemployed, and thousands of miles from home, Edward and his colleagues settled on the island of New Providence in the Bahamas to reconsider their options.

These were fanciful days for Edward. He discovered in the small town of Nassau a life quite unlike that which he had left behind. The atmosphere of wild and noisy freedom in this small stateless encampment overwhelmed and captivated him. The drinking, the gaming, the women, the aimless desire to simply live as one pleased. And yet, as carefree as he was, his beloved Caroline was never far from his mind. If he could make something of himself in the West Indies - working a sugar plantation, perhaps - he might win her back after all his time away.

But in absence of true conviction, habit takes hold fast; and it was only a matter of time before Edward set back out to sea with his mates, to live the life they knew best; no longer privateers - legal and sanctioned - but as pirates now, with nary a whit of loyalty to King and Country, earning his fortune by the sword and pistol, praying his end was never too near...

(Note: If we can remove some of the more unseemly bits of his personality, this is a GREAT backstory. Edward's bound to be a hit. -OG)

Retrieved from "https://assassinscreed.fandom.com/wiki/Database:_Edward_Kenway_(Black_Flag)?oldid=718563"
Community content is available under CC-BY-SA unless otherwise noted.