Edward James Kenway was born on 10 March 1693 in Swansea. His father was Bernard Kenway of Manchester and his mother was Linette Hopkins of Cardiff. At the age of ten, the Kenway family moved to a farm just outside of Bristol. Although his parents were proud of their modest, but honest lifestyle, the move affected Edward's mood and he became more and more rebellious. By the age of 16, Edward spent as much time away from the farm as possible, getting into trouble in the excitement of the city and its rough company.

In his cups at the Auld Sheillagh pub, Edward noticed that three of his enemies, Tom Cobleigh, his son Seth, and a man named Julian, were happily getting a young maid very drunk, with less than honest intentions. When they dragged her out of the pub, Edward followed them and confronted them in the street.

While he knew he was outnumbered, Edward spotted a rider approaching in the distance, and attempted to stall for time in the hopes that the stranger would come to his aid. Although he landed the first strike, Edward was quickly overwhelmed by the three men and received a sound thrashing. As expected, the rider arrived and intervened, but it was not a man, rather a woman of some social stature. She quickly sent the Cobleighs running, and introduced herself as Caroline Scott, whose family lived on Hawkins Lane in Bristol. She thanked Edward for looking out for the young woman, who was her family's maid, Rose.

Edward asked if he could see her again when he was more presentable, but Caroline informed him that her father wouldn't approve. However, it was too late, Edward Kenway was already smitten with Caroline Scott of Hawkins Lane.

Edward Kenway's marriage to Caroline Scott was the scandal of Bristol, as she had spurned a life of luxury for a common farmer. Caroline's parents attended the wedding, though only her mother seemed truly happy.

Edward and his new bride moved to an outbuilding on the family farm. The shack had a badly-thatched roof and walls made of packed mud. Dismayed at his lack of prospects to take care of his new bride, Edward began to frequent the inns again, but rather than reliving the mischievous days of his youth, he sank deep into despair and deeper into bottles.

Edward felt that his only hope to provide the life he felt Caroline deserved was to become a privateer, but Caroline was not keen on the idea.

Caroline Scott asked her husband Edward Kenway if privateering was dangerous. Edward confirmed the danger, but stressed that the rewards were worth it, vowing that it would elevate their lives from their current modest conditions, in a way that service in the King's Navy would not.

Caroline reluctantly allowed Edward to pursue this dream, but made him promise that he wouldn't be away for longer than two years.

Against Blackbeard's advice, Edward decided to serve on a ship under the command of Captain Bramah. They were attacked by the Royal Navy, and Edward spotted a mysterious hooded figure on one of the British ships.

Edward returned fire, and managed to destroy some of the attacking vessels, but the hooded stranger appeared on deck and killed Captain Bramah with a blade mounted on his wrist. The man made for Edward, but before they could clash, the ship's magazine caught fire and exploded, sending Edward into the water. 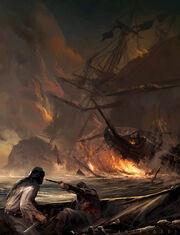 Edward surfaced among flaming wreckage and swam to the beach and collapsed, exhausted but happy to be alive. He was also amused to see the hooded attacker also washed ashore, nursing a wound in his stomach.

The wounded man asked Edward to take him to Havana, offering money. Edward mocked him, and the man pulled a gun, but it misfired due to wet gunpowder. The man ran away into the jungle, and warned Edward that he would kill him if he followed.

Edward chased him through the island and caught up to him in a clearing. After a brief sword fight, Edward killed the man. 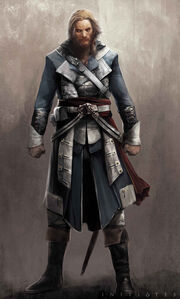 Edward searched the corpse of the hooded man and found a satchel containing a crystal cube, several strange maps, and a letter. The letter was addressed to a Duncan Walpole from the Governor of Cuba, Laureano Torres y Ayala, and stated that although Torres wouldn't recognize Walpole by sight, he would know him by his distinctive clothing, made famous by Walpole's secret order. Torres also promised a reward, if the items in Walpole's possession were delivered in order to further his own secret cause.

Edward decided to assume Walpole's identity to collect the reward. He gathered up Walpole's belongings into the satchel, but tossed the damaged wrist blade into the sand. Edward set out for Havana in the dead man's clothes.

Edward saw a schooner in a nearby bay. He also saw British soldiers who were accusing a merchant of piracy, threatening to commandeer his ship. One of the merchant's crew tried to make a run for it and was shot dead.

Edward leapt into action, killed the soldiers and saved the merchant. While grateful, the merchant lamented the death of the ship's captain, as he had no clue how to sail his own vessel.

Edward introduced himself as Duncan, a man on a secret mission from King George, and offered to pilot the vessel. The merchant's name was Stede Bonnet, who was relieved to learn that “Duncan” was not a pirate as he first suspected.

Both men were bound for Havana, and Edward was soon behind the wheel of Stede's schooner. The merchant told Edward that he owned a small plantation and made a living selling sugar cane, molasses, and rum, and wondered if he would attract attention from pirates. Edward chided him, saying that no pirate alive would turn his back on a keg of rum.

As they made for the open sea, Stede marveled at Edward's natural ability for sailing and combat.

Retrieved from "https://assassinscreed.fandom.com/wiki/Database:_Edward_Kenway_(ACI)?oldid=727567"
Community content is available under CC-BY-SA unless otherwise noted.