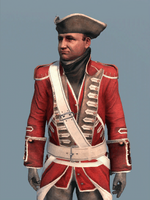 Edward 'Bulldog' Braddock was the Major General placed in charge of British troops at the beginning of the French and Indian War, probably because he had a nickname like 'Bulldog'.

Braddock was serving as the acting Governor of Gibraltar when he received the command in North America. He was given control of two regiments of Regulars and assigned to win back Fort Duquesne from the French (known as the Braddock Expedition) - as part of a larger attack on the French colonies on the continent.

Braddock had been well-liked as the governor of Gibraltar, but things changed once he reached North America. He had been known for keeping strict order among his troops, but it seems he went beyond that into brutality. He gained a reputation for being quick-tempered and cruel. He also displayed a contempt for non-British soldiers that alienated the colonial militia he was trying to recruit. So a cruel, racist bulldog, then. They're my least favourite type of bulldog.

Braddock took a bullet to the chest during a battle in 1755, rumour has it from one of his own soldiers. Which is a job hazard when you're nasty to people around you and they all have guns. Sounds like the bulldog may have been put down.

It was George Washington who carried Braddock from the field on his sash - which Braddock then entrusted to Washington. (That 'carrying' bit may sound a bit odd, but that sash is bigger than it looks - more than three metres long - and doubled as a field hammock. It says something about officers that they'd wear a piece of clothing designed to carry their body off the battlefield - which would also single them out for getting shot at. The ways of war are mysterious.) Braddock died of his injuries a few days later; Washington kept the sash.

Here's something interesting - because of concerns that enemy soldiers would desecrate Braddock's body, he was buried under the road, so the wagons would run over the earth and hide the gravesite. In 1804, roadworkers rediscovered the remains and they were moved to another site - which is now marked by a marble monument.

Retrieved from "https://assassinscreed.fandom.com/wiki/Database:_Edward_Braddock?oldid=689085"
Community content is available under CC-BY-SA unless otherwise noted.